It’s all about Stucco and Rock today. The exterior of the house is finished and looks incredible. Sure, there were several bumps along the way and a few times I thought that I might lose it. But…. every single strand of hair that was pulled from my head was worth it. 🙂

I was thrilled to see the stucco guys progress quickly… In fact they were basically done by the time I spotted the major, IT HAS TO BE FIXED, problem.

So there I was, all giddy and tired from my week long painting excursion, when I decided to take a trip around the house at the end of a long day. Everything had been going smoothly, but I figured I’d double check the days progress. Call me a smart lady!

All was looking great. Okay, sure, a few minor flaws here and there, but those were completely fixable. Then I turned the corner on the last wall of the house… And I went straight into panic mode.

Call me dramatic. I can handle it. But when you’re paying someone to do something exactly how you want it and it turns out completely wrong, I think you can be dramatic.

And the cherry on top: they no speak a english. And I no speak a spanish.

Let’s back up. Here’s where it’s all so right. 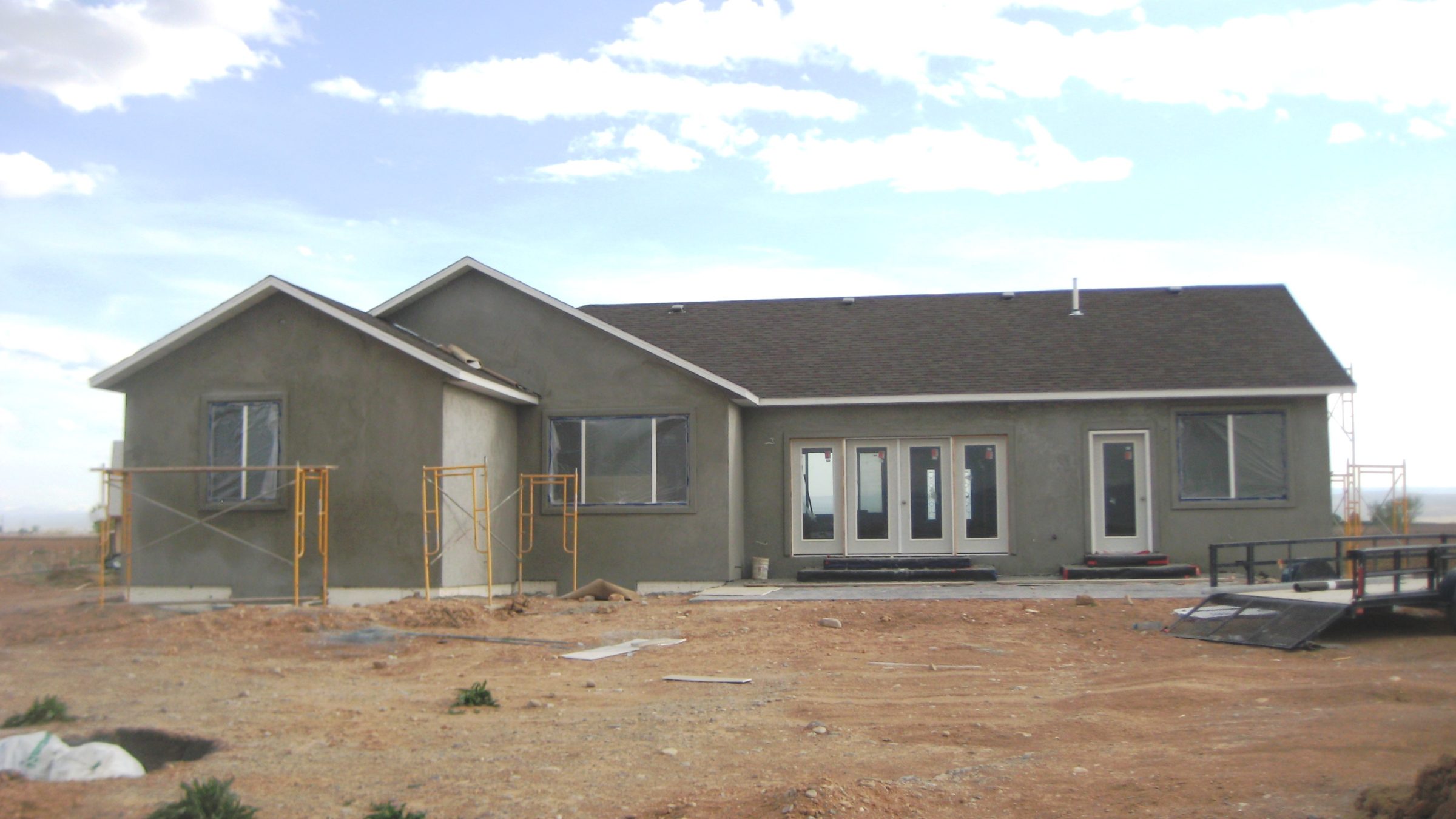 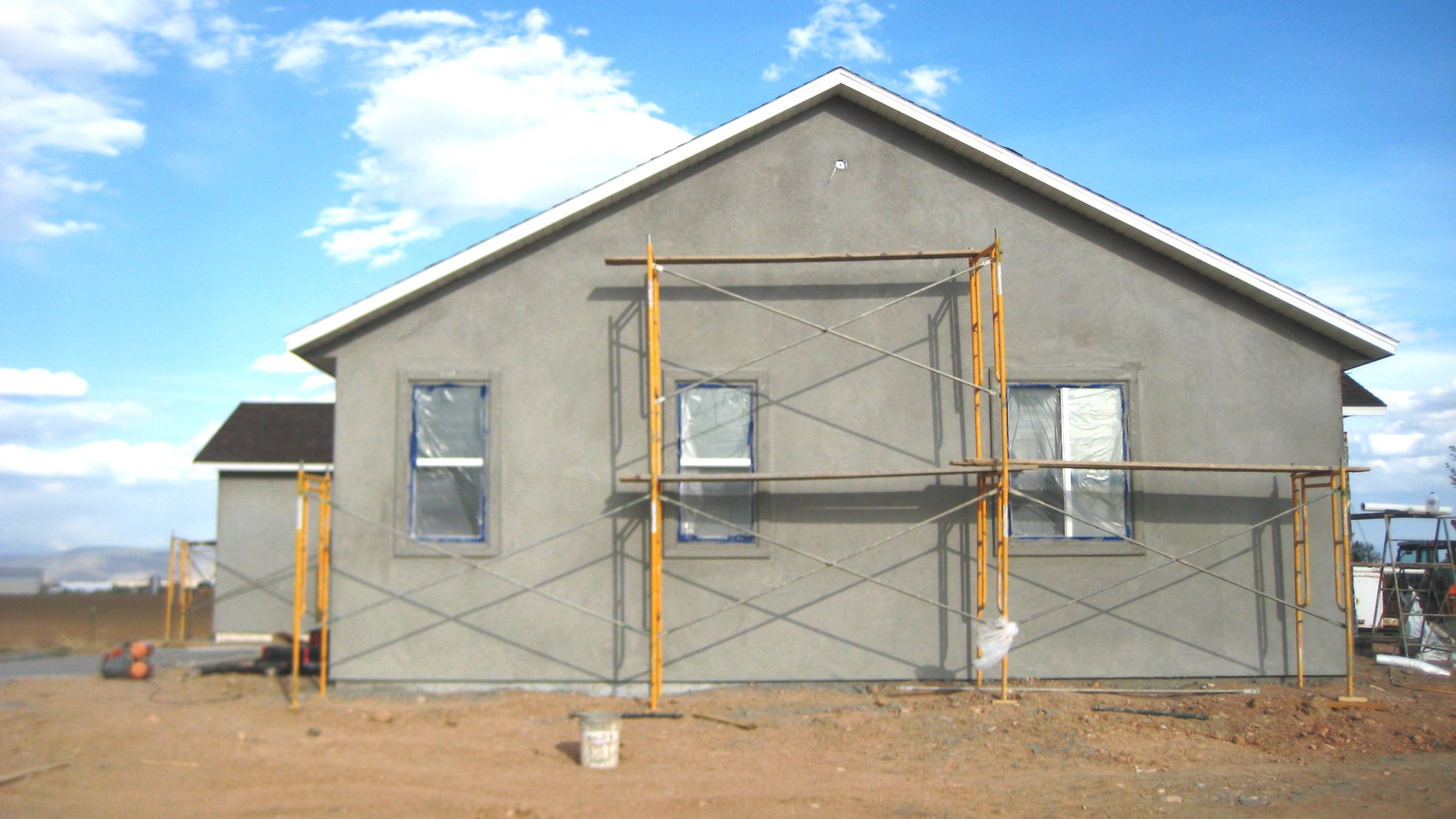 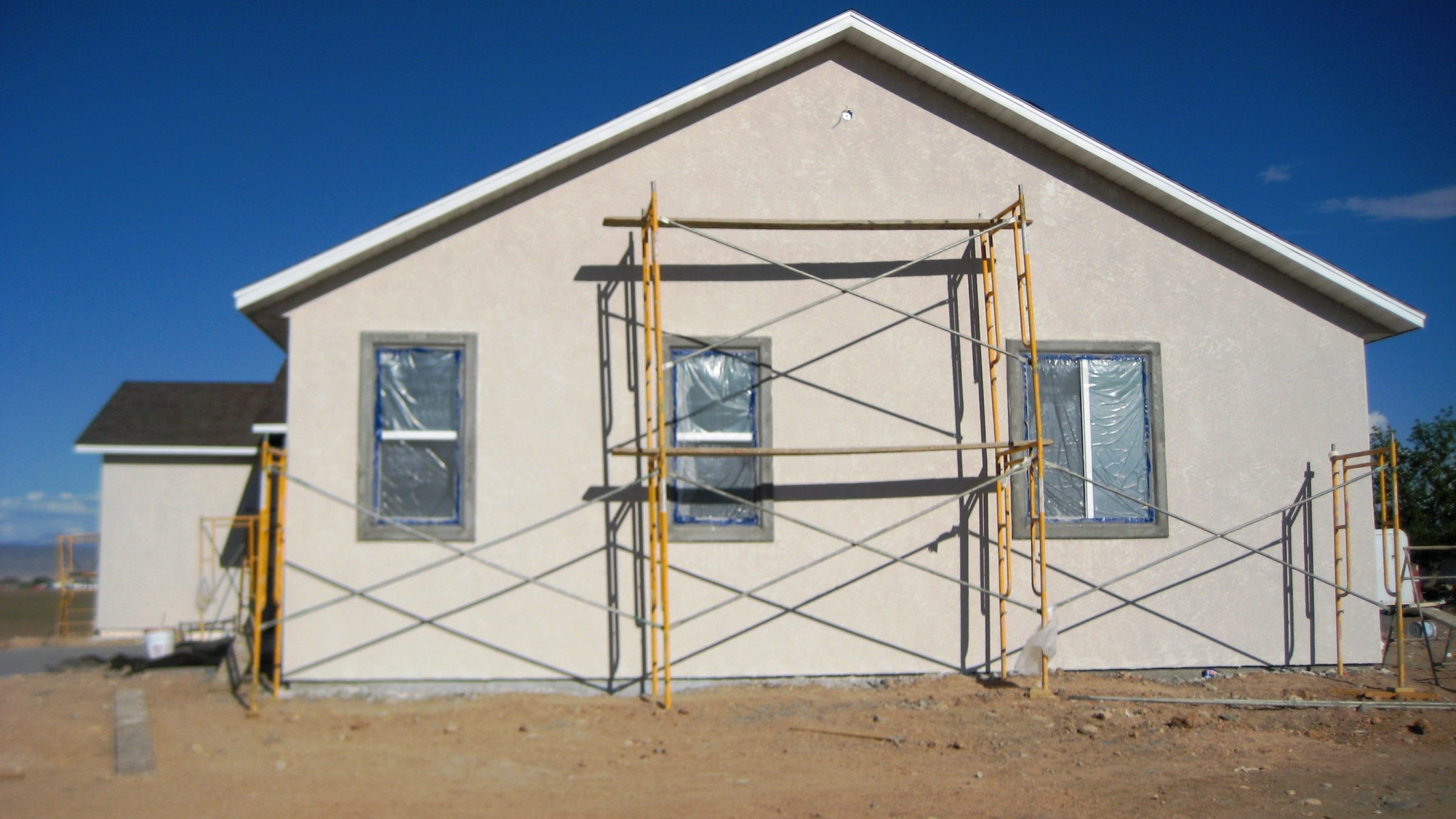 This wall has been textured. Sure, I know it totally looks fine from this picture. But, lets take a closer look. At this point I politely asked the worker if this was the “finished” product. Because of his lack of English I first had to describe the meaning of finished. Like: done and finito. Then, I threw in: “no bueno” and “me no likey”. Very technical.

The, “No Bueno”, seemed to do the trick because he even repeated it with a confused look on his face.

Finally, some communication. That we both understood.

I told him to stop the other workers, which quickly brought us back to zero communication. At this point I was over him and found each and every worker and told them all it was “no bueno”.

Those two words can do powerful things people. Like stop a whole crew from messing up the rest of my house.

The leader of the crew tried to speak his partial English, and by partial I mean partial, to describe the texture of the house. Finally, he called his English speaking boss. Finally!

I kindly told her that I didn’t like the texture and that I figured at this point it was permanent because it was dry.  She said she would come the next morning to make a plan.

The next morning I met the owner. She assured me it was no big deal; that they would skim that wall and the other partial wall with a new coat of mud and would finish the house in the texture I wanted. Which, by the way, I never picked in the first place. I figured they would, you know, ask me what I wanted before they, you know, put it on the wall.

I tried to explain the texture that I was after, which wasn’t working since I know zero about stucco. So, I did the next best thing and showed her what I wanted, which was on another house nearby.

Now that we had the correct texture, the owner asked her workers to provide me with a sample.

Because of the switch in texture, the make-up of the mixture had a different base, which didn’t combine well with the color that I had chosen.

Don’t ask me why, because I don’t know. It’s a stock color. We should be able to get that color with any texture we pick.

10 samples later and we had this: In this picture we hadn’t done the other 6 samples. Basically, the entire left wall was covered in different colors.

The scary part: they were all suppose to be the same color. Can you believe someone would try and pass that white color of for a tan/ cream. It’s crazy.

We almost thought there wasn’t going to be a cream/ tan color. I was real sad. We picked that rock for that color. They were meant to go together.

But you know what? That little light bulb was on to something.

We had the workers mix the original paint formula into the new material. They slathered it on the wall and… IT WORKED!

What a relief. I can’t even tell you how much I was worried about having to “settle” for our stucco texture and color. Really, who wants to pay for siding and then hate it every day because it turned our wrong? 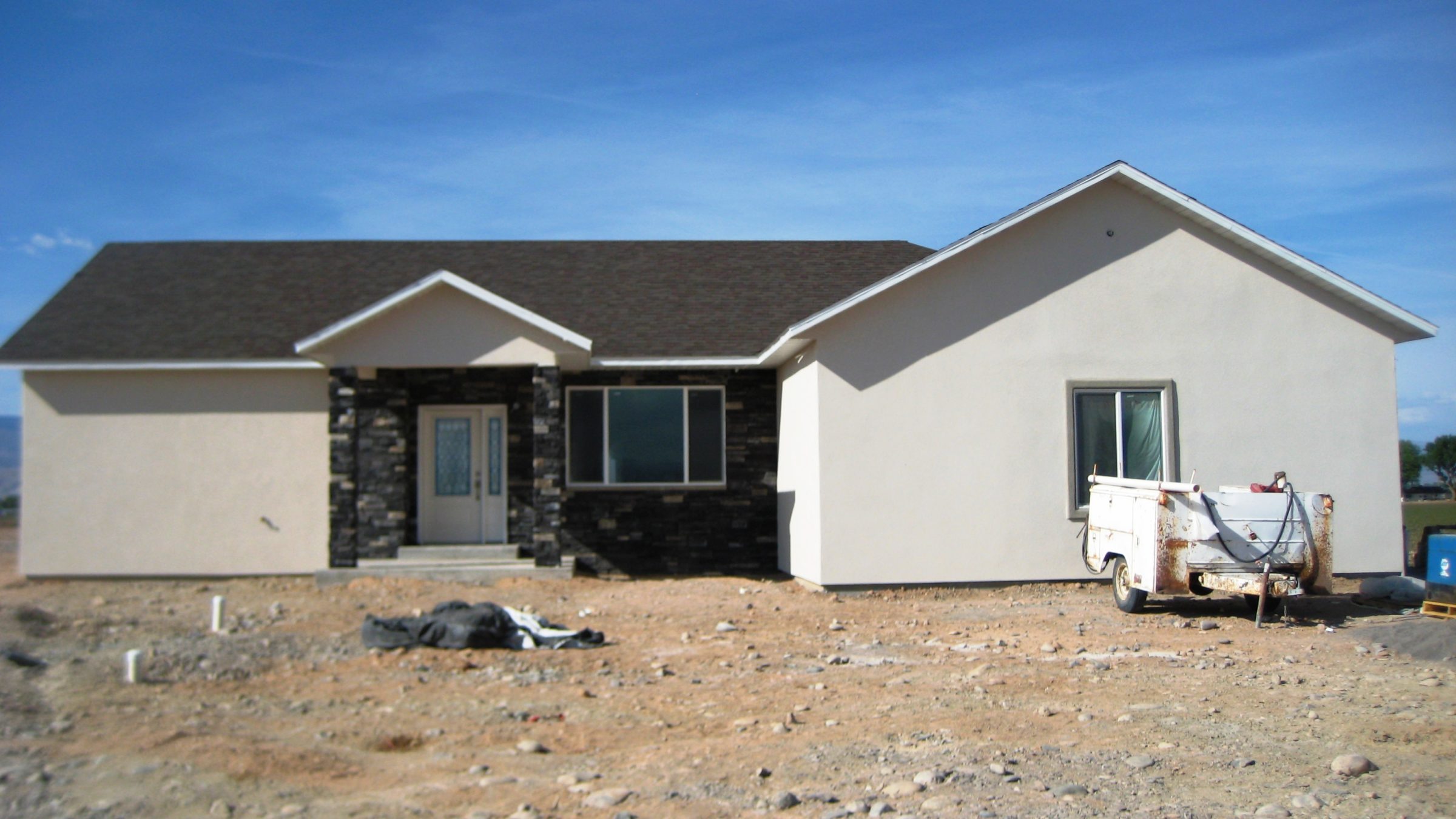 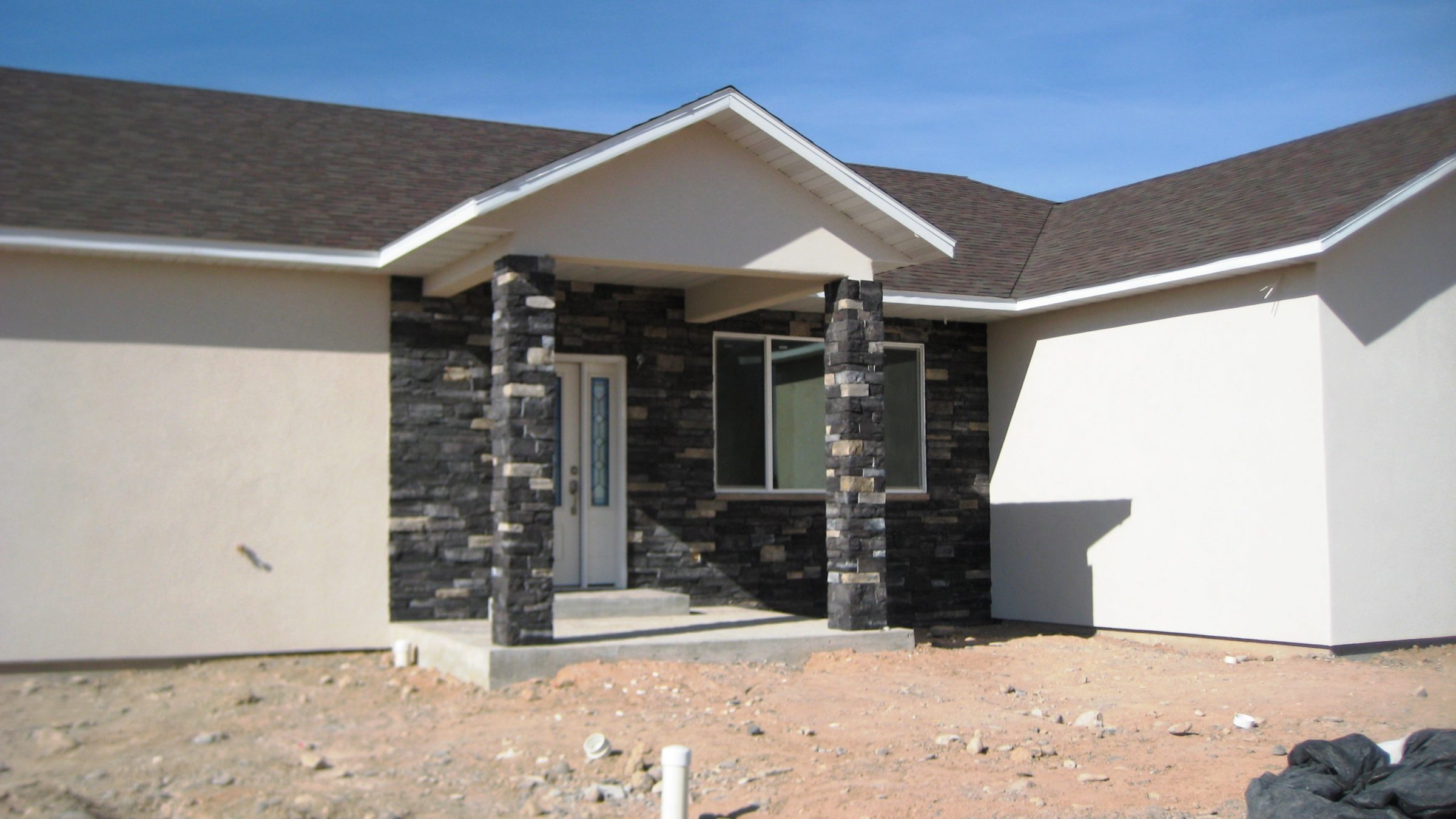 And here’s a close up of the stucco texture before and after: It looks so much better! What a relief.

So, there you have it. The stucco and rock is officially done and we love it. It turned out exactly how we wanted it.

What about you? Have you had any siding disasters? Or wanted to pull all your hair out because you wanted something a certain way? It happens to the best of us!